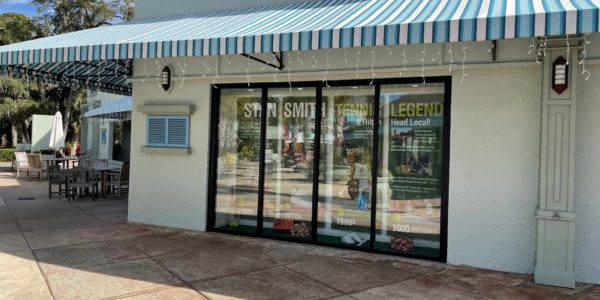 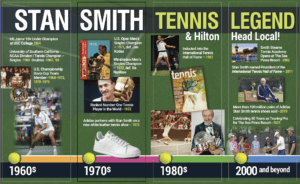 WHERE: The Shops at Sea Pines Center in The Sea Pines Resort on Hilton Head Island, SC. The new exhibit is also adjacent to the Smith Stearns Performance Center where student athletes workout to improve their fitness, strength and flexibility.

DETAILS: Smith Stearns Tennis Academy pays tribute to Stan Smith’s illustrious tennis career and leadership, including the 50th anniversary of his first major singles championship at the U.S. Open in 1971, as well as the 50th Anniversary of Stan Smith as The Sea Pines Resort’s official touring pro. This new exhibit was created by staff members of the Smith Stearns Tennis Academy in collaboration with The Shops at Sea Pines Center on Hilton Head Island, SC. 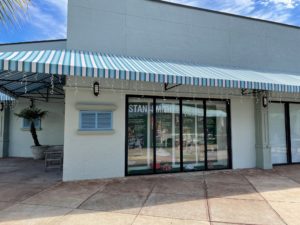 At the new exhibit, learn about highlights of Smith’s impressive professional career, which made him a tennis legend, both on and off court, and for Hilton Head Island. Facts on the new display include: 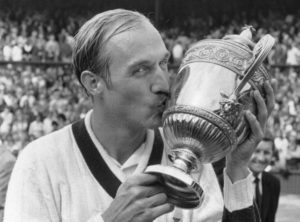 Stan Smith, originally from Pasadena, CA, and resident of Hilton Head Island, SC since 1971, is a former U.S. number one player in the world. Smith won the U.S. Open Championship in 1971 and Wimbledon Championship in 1972. He represented the U.S. in the Davis Cup for 10 years, winning the coveted championship seven times. In sum, Smith has won 39 singles titles and 61 doubles titles. Smith was the Director of Coaching for the USTA Player Development Program, working with top-ranked professional players Lindsay Davenport, Jennifer Capriati, and Todd Martin, among others. He coached the 2000 U.S. Olympic Men’s Tennis team in Sydney, Australia.

As a player, Smith was a serve and volley master, plus was known for his tremendous on-court composure. As a coach and tennis leader, Smith is known for his ability to clearly communicate about tennis technique, strategy, and the mental approach to the game – as well as for his legacy of sportsmanship and courtesy. In fashion, Smith is known for the iconic Adidas white leather tennis sneakers named after him.

On Hilton Head Island, Smith has been very active with the local Boys & Girls Club, serving on the Executive Committee Board. In addition, Smith is a Trustee with the Heritage Classic Foundation, a nonprofit organization dedicated to supporting educational and charitable initiatives through the RBC Heritage PGA TOUR golf tournament.

For a video about the Smith Stearns Tennis Academy, please watch: Academy Video.