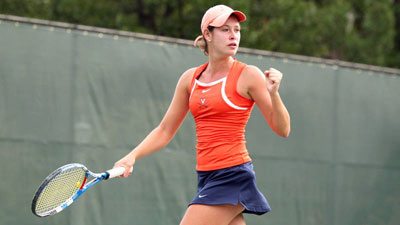 Molly O’Koniewski, Class of 2011
Full Scholarship to UVA
November 14, 2010 — One of the longest attending students at the academy, Molly relocated from the Boston area to attend Smith Stearns almost four years ago. Molly and her family chose to come to the academy because they immediately felt at home and were impressed with how all the coaches got to know her and her game so quickly. Molly feels very fortunate to be able to train with such hard working peers, be able to have individualized attention day in and day out, while also being able to live on beautiful Hilton Head Island with her closely knit family. Molly continues to be an extremely hard worker and leader to the other students and possesses a drive to succeed in tennis and all areas of her life. She has grown in many ways, both on and off the court during her years at the academy, and everyone is proud of the poised young woman she has become today.

Molly has many great experiences in her years at the academy but one of her most memorable is definitely a funny one, and shall we say a “learning experience.” One day when Molly was taking a lesson, Billy was teaching her how to slide. She misinterpreted what he meant by a “baseball slide” and proceeded to slide head first as if the court was first base! Let’s just say Molly has come a long way since then!

Having received a full scholarship to attend then University of Virginia, Molly recognizes that as the athletic achievement she is most proud of, however, she has been a strong contender on the court consistently achieving a top Southern and National ranking throughout her junior career. On the international front, Molly reached the quarterfinals of the prestigious Orange Bowl Tournament in 2009. Sportsmanship is also one of Molly’s strongest qualities as she has displayed great attitude and respect both on and off the court, which has made her the recipient of fifteen national and sectional tournament sportsmanship awards. A member of the National Honor Society, Molly has achieved the highest honor roll in every semester of her high school career.

The University of Virginia will be Molly’s home next fall as she officially starts her collegiate tennis career as a Cavalier. It was not a hard decision for Molly to make as she verbally committed in the spring, indicating UVA’s strong academic and athletic reputation as the combination she was looking for in a school, as well as the historic tradition of UVA itself. Molly recognizes both head coach Mark Guilbeau and assistant coach Troy Porco as another main reason she chose to attend UVA, as she feels they will help continue to improve her tennis game while playing in the strong Atlantic Coast Conference. Molly is most looking forward to playing in a team environment where everyone helps support one another and has a mutual desire to keep improving. With Molly’s determination to succeed she is poised for a successful future.