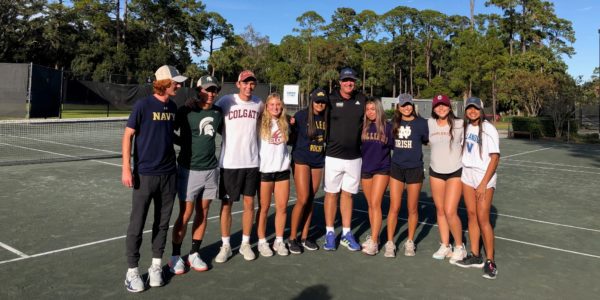 2021 was another successful year at Smith Stearns!

Our students dazzled on the pro circuit, in college, and in juniors!

• Jessie Pegula reached a career high WTA ranking of #15 in the world in singles and #46 in doubles, and competed in the 2020 Olympic Games! She also reached the Singles QF of the 2022 Australian Open!
• Hayley Carter reached a career high WTA ranking of #25 in doubles and made the finals at the Miami Open; she’s now retired and is the Assistant Coach at Vandy!
• JJ Tracy was named ITA Midwest Rookie of the Year and Big Ten Freshman of the Year! JJ also made the finals of the 25K USTA Pro Circuit event at Ohio State. He is currently ranked #14 in college!
• Andres Martin continues to dominate at Georgia Tech and is currently the #9 player in the country in singles and #3 in doubles!
• Kylie Collins and her Texas Longhorns won the NCAA Team title where Kylie had a dominating freshman season in singles and doubles! Kylie also won two $25K Pro Circuit events this year!
• Cleeve Harper is thriving at the University of Texas and is currently ranked #13 in doubles in the nation! He also won his first pro title at the $15K in Cancun!
• Meg Kowalski earned All-American honors at the University of Georgia and earned a career high national singles ranking of #12!

Smith Stearns students from both the Class of 2021 and 2022 have signed with some of the best tennis and academic schools in the country, demonstrating prowess on and off court.

The week of November 8-12, Smith Stearns Tennis Academy hosted its first-ever Spirit Week! Spearheaded by Senior Savie Seebald, along with her fellow senior peers, the week was filled with excitement and truly made a memorable splash. The entire full-time academy participated.

In Nov 2021, the annual UNLV Women’s Tennis invitational was renamed to honor former UNLV standout player, Jolene Watanabe. Jolene was instrumental in bringing success and notoriety to UNLV. Watanabe was a beloved Smith Stearns Tennis Coach and sadly passed away in 2019 after a battle with cancer at the age of 50.

Overall, 2021 was a year to remember! Despite ongoing interruptions from the pandemic, our players continued to stay focused, improving their games and playing awesome at the tournaments!! We’re looking forward to a robust spring of high-performance play and individual personal growth. Can’t wait to see what 2022 will bring!